The Rise And Rise Of False Anti-Semitism Accusations

Before I write this blog, I just want to state that I believe in Israel’s right to exist as a nation, however I am against that nation being built upon the homes, villages and graves of the native indigenous Palestinians, who lived there long, long before the creation of Israel 70 years ago.
I am 100% anti-Zionist, but I do not equate Zionism with Judaism as they are not connected, there are many Jewish people against Zionism and there are many non-Jewish Zionists, so Zionism and Judaism cannot be equated as the same thing.

Anti-Semitism is real, it is as real as racism towards PoC and as real as Islamophobia, it comes in many guises from Holocaust denial, horrible memes accusing Jewish people of being greedy for money, to accusations that Jewish people run the world financially and accusations that Jewish people did 9/11 and of course the age-old slur that the Jews killed Jesus.
Jewish people receive as much hate as any other non white group in the world, so anti-Semitism cannot be labelled as false or imagined, it is simple, if you hate a Jewish person for simply being Jewish, if you use memes that accuse them of being greedy for money, if you use any of those horrible tropes thrown at Jewish people, you are an anti-Semite, you are no better than a neo-Nazi or the typical racist who hates someone for the colour of their skin. 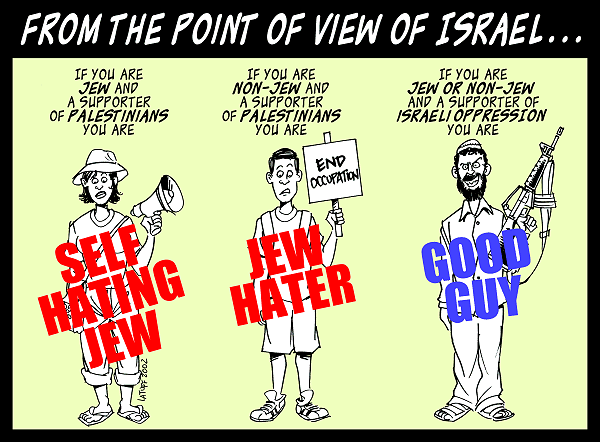 False Accusations Of Anti-Semitism Are Real Too

As much as anti-Semitism is real, so too are the false allegations and accusations on anti-Semitism, these false accusations are lambasted towards people who support Palestine and condemn the barbaric and brutal actions of Israel towards the Palestinians, you are also called an anti-Semite if you condemn Israel’s treatment of Black people in Israel.
Accusations of anti-Semitism are falsely thrown at critics of Israel to silence them, after all no one wants to be labelled as hating Jews when they harbour no ill intent or bad feelings towards Jews, so pro-Israeli’s use this false label to attack people who say anything they consider bad about Israel.
They hope these accusations will stop people mentioning how the IDF murder Palestinians in cold blood, how they take great delight at shooting children and arresting children they have not shot, Israel does not want the world to know how they use collective punishment towards Palestinians or their internment of Palestinians and migrants.
Israel wants no one to know that they use methods towards Palestinians that equal what White people used in Apartheid South Africa such as Israel’s settlement policy or their refusal of Palestinian self-determination, Israel also practises on Palestinians what White people used towards Black people in USA, like segregation.
Israel continues to evict Palestinians from their homes and build illegal settlements on Palestinian land, Israel’s goal is to completely remove Palestine from the map, so that the entire land that used to be Palestine is Israel, in doing this Israel kills the two state solution, but this has been the plan by Israel all along and anyone who is Palestinian or Pro-Palestinian already know this.
Now we will move on from Palestine to Jewish migrants, who happen to be black and from Africa, Israel has continued to treat these Jews as second class citizens and have put them in detention camps or deported them, Black Israeli Jews also face discrimination and racism from White Israeli Jews who are the majority in Israel, history also tells us that Israel has sterilised Black African women who have come to Israel.

All those reasons above are why we condemn Israel, why we call for BDS, why we ask for Israel to be investigated and tried for war crimes, it is not because Israel is Jewish, but because they commit war crimes and cause so many human rights violations.
Condemnation of the above is why we falsely get labelled as anti-Semitic, even though we have not attacked any Jewish person, we are labelled as such to silence us, to make us go away, to make us seem like the bad guy and to deflect from the crimes and atrocities committed by the Jewish state.

Examples Of False Accusations Of Anti-Semitism

Anyone who is Palestinian or Pro-Palestinian have been labelled as an anti-Semite or been called anti-Semitic at some stage in our life, most commonly called anti-Semitic are the big voices who show solidarity towards Palestine, some examples are the honourable and incorruptible MP George Galloway, lyrical genius and veteran rapper Talib Kweli and Pink Floyd’s Roger Waters, hey are only a very small number of Pro-Palestinians that get labelled as anti-Semitic, the number is actually far bigger, but i am using them as an example of good people who get the false anti-Semite label thrown at them

George is often called anti-Semitic because he supports Palestine and calls out Israel’s crimes against Palestinians, one of the most well-known moments of false accusations was when he was posing for a photo with a Moroccan doctor, when a cowardly thug armed with a knife, started kicking and punching the MP, whilst saying to him “anti-Semitic little man, i fucking despise you”, the coward said he did this because of Mr Galloway’s views on Israel:
Article On Coward Who Attacked George Galloway
Anyone who is Pro-Palestine, Pro-Justice, Pro-Human Right is justified in condemning Israel for the horrible stuff it does.

I have followed Talib for quite a while on Twitter, he calls out racist and Neo-Nazi trolls, white supremacists love attacking him and so do Zionists, they sometimes band together to attack him.
Talib received hate from Zionists because he stated that he would not do a show in Israel in solidarity with Palestinians because they would not have access to his show: 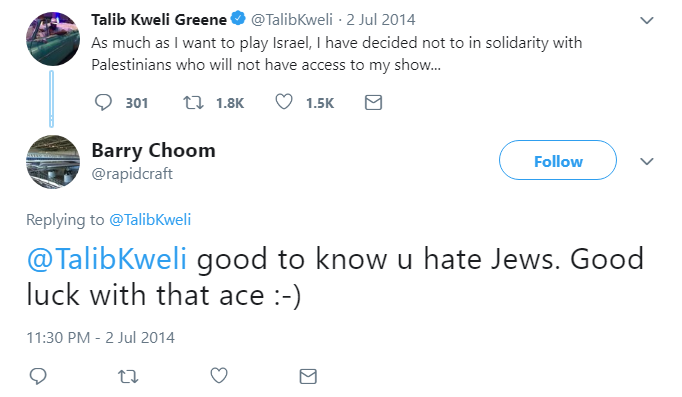 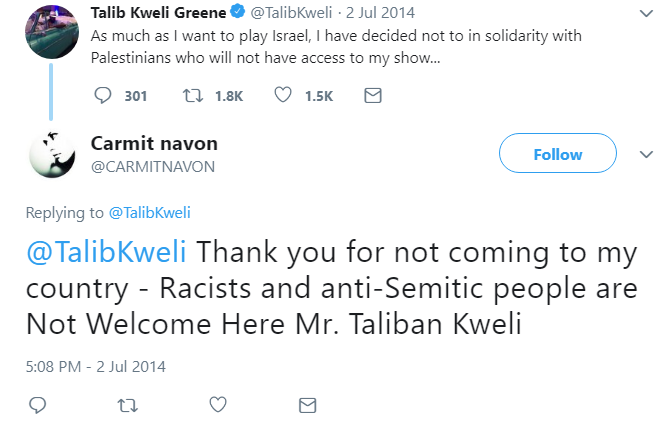 Pro-Israeli troll and white rapper Remedy Wu has also attacked Talib for his support of Palestine, Remedy would love Palestinians to get out of Palestine and go live somewhere else: 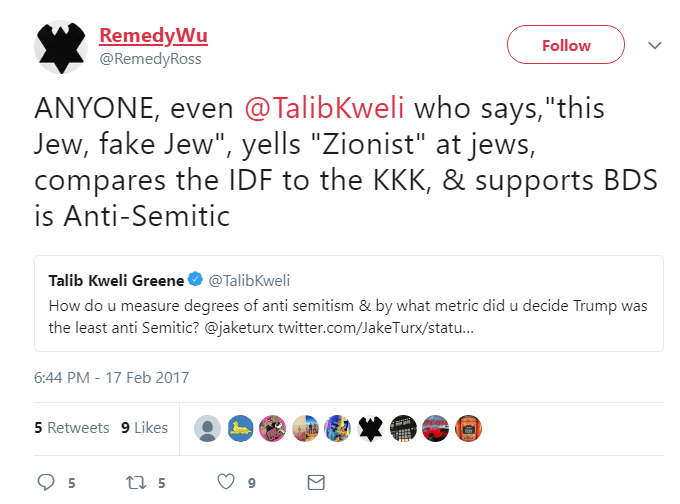 Roger has for a long time spoke out against the mistreatment of Palestinians and has had the anti-Semite accusation thrown at him continuously because of it, here is one such example, a petition created by a troll in order to get people to boycott Roger Waters, you can view it here:
Boycott Roger Waters – Stop BDS
A line at the bottom states this:

We, the undersigned, therefore boycott Roger Waters until he renounces antisemitism in all of its forms, including the unjust boycott of the Jewish state.

It is followed by comments in the “Reason For Signing” section:

As you have seen above, there are many accusations of anti-Semitism, but they are all false, criticism of Israel is not criticism of Jews or Judaism, it is a criticism and condemnation on the government and those who support the government of Israel.
There are many, many other great Palestinians and Pro-Palestinians who get false accusations of anti-Semitism thrown at them, i will no doubt myself have the false accusation of anti-Semitism thrown at me because of this article, on top of that any Zionist or pro-Israeli troll who reads this will try to smear me, because that is what they do to anyone who speaks out against the crimes committed by Israel.

I leave you with a song from my favourite musician: