Called A Terrorist For Wearing A Scarf

I was going about my day as usual on Twitter, minding my own business when i got a mention and when i checked it out i was greeted with a cropped image version of my Twitter Avatar, with the words “She is a terrorist”: 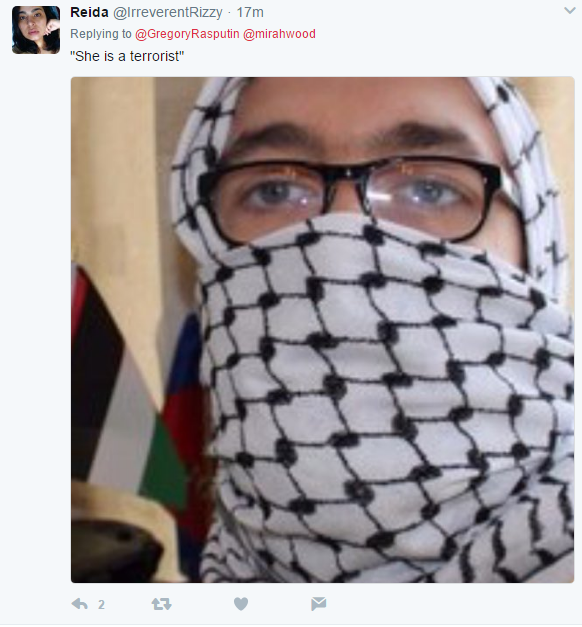 Now i am sure you are wondering what all that is about, well last night i responded to a tweet from one of my favourite Tweeters, in which she was speaking about the actress of the new Wonder Woman movie Gal Gadot:

There's nothing wonderful about her

@mirahwood i feel sad that so many girls will see her as someone to look up to, as a role model, not realising that she is a terrorist 🙁

That is right, i called Gal Gadot a terrorist, now why would i do that?, well if you look at the first tweet by Mirah, you will see that she posted an article about Miss Gadot, speaking about how she is Pro-Israel and a former Israeli Deanne Force(IDF) soldier, if you know anything about the ongoing ethnic cleansing of Palestine you will know that Israel uses terrorism against Palestinians all done via the hands of the IDF, the shoot women and children, they arrest children and imprison them, they knock down homes of Palestinians, all these acts are criminal and an act of terrorism against the Palestinian people, so as Miss Gadot was a member of the IDF, she was involved in using terrorism to control the Palestinians, she also supports the terroristic regime of Israel, she uses her place on her high pedestal to preach how the IDF is great and Palestinians are rubbish, which didn’t matter to this person tweeting me:

@IrreverentRizzy @mirahwood oh so because i am wearing a scarf, i am a terrorist?, that is quite prejudice of you

@IrreverentRizzy @mirahwood oh i get it, you ignorance assumes i am against 'woman only screenings'?
not the case, try to look beyond your own ignorance, thank you

Her response was to call me a terrorist, yet again:

@IrreverentRizzy @mirahwood I am not on a list anywhere, i am Irish, why would i be? and i demonise all people who forcefully brutalise children, murder children etc

Now i am on 'a list' because i am wearing a head scarf, she assumes that i am a Muslim, so prejudice and Islamophobia rolled in one https://t.co/eYPT3NgImt

She replied to me with this: 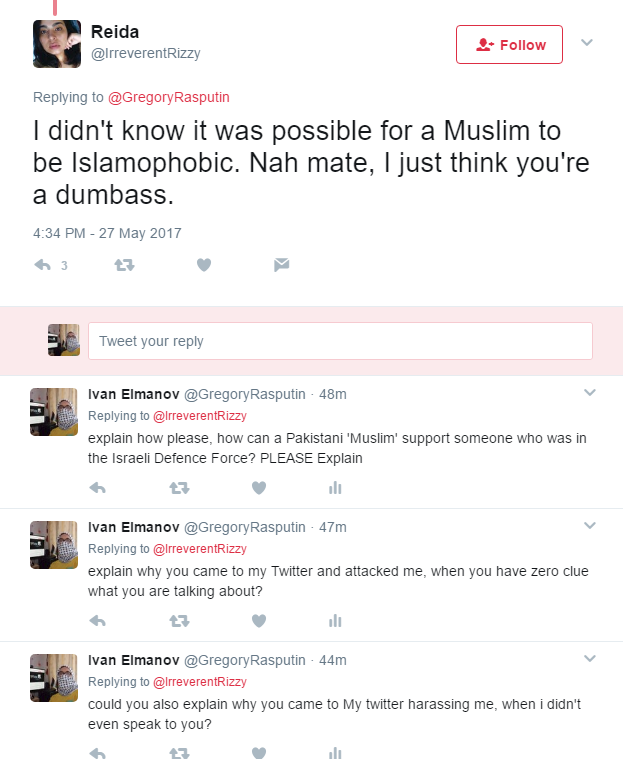 You can see my responses that went unanswered, but what you will notice is that she says she is Muslim, but when you look at the bigger picture and some of her past tweets, you will see that she used to be a Muslim, or was brought up one, she no longer practices the faith:

This she has every right to do, if she does not want to be a Muslim or practice Islam that is her choice, but how can she claim to be a Muslim when she clearly states she left it behind, obviously she is only Muslim when it really suits her or a point she is trying to prove, but we there is more, she claims to be a ‘feminist’ on her Twitter bio, 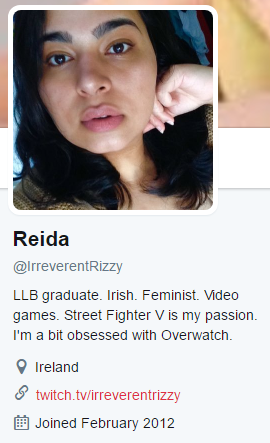 this is just another label she uses when it suits her, if she was truly a feminist then she would support all females, but its obvious that she does not care for females who are Palestinian, otherwise she wouldn’t have gotten her butt out of shape when i called Gal Gadot a terrorist.

If we look further, here are some more of her choice tweets:

The word ‘spastic’ is used in a derogatory way to describe people who are mentally disabled or who have Down Syndrome, so it is a common insult in UK and Ireland, it is like calling someone a retard multiplied 100 times, as she is a feminist does this mean she only likes females who are not mentally disabled?

I am not sure if she posted this just to piss people off or if she is serious, anyone with a sane mind knows that homosexuality is not a choice.

Mei is a, Chinese character in a video game, the word ‘chink’ is a derogatory and racist word towards Chinese people, so does this feminist only like females who are not Palestinian, who are not Mentally Disabled and who are not Chinese?